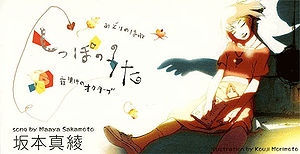 Yoake no Octave is a pop song recorded by Sakamoto Maaya. The song first appeared as the second B-side of Sakamoto's seventh single Shippo no Uta and was later featured in her second best-of album Single Collection+ Nikopachi as track #1. Is also found on the Kanno Yoko's album Space Bio Charge as track #12 of the third disc. It was made for Napple Tale but never used.