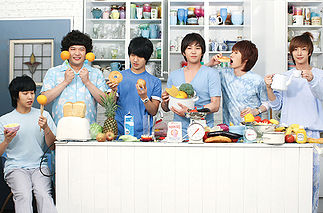 Super Junior-Happy made an unofficial debut performance on May 3, 2008 at the Power Concert although they had not formally introduced themselves as the subgroup at the time. On May 30, SM Entertainment released the official announcement of the subgroup through news agency Newsen. The subgroup's first mini-album, COOKING? COOKING!, was released on June 5, 2008. The music video for their title track was released on that same day.

On June 7, Super Junior-Happy debuted performing their first single at the 2008 Dream Concert. On the day before their debut, the subgroup held their first sign fan meeting to celebrate the success of the sales of COOKING? COOKING!. On the morning of June 6, over thousands of fans lined up for tickets to the fan meet, overcrowding the streets. Close to 10,000 copies were sold by the first week of release. According to the Music Industry Association of Korea, the mini-album sold 20,978 by the end of June and was ranked fifth in the monthly charts.

On August 3, Super Junior-Happy started the promotions of their second lead track, "Pajama Party". The music video was released on August 4, 2008. "Pajama Party" promotions only lasted a month, and promotions for the mini-album officially ended on September 7, 2008.