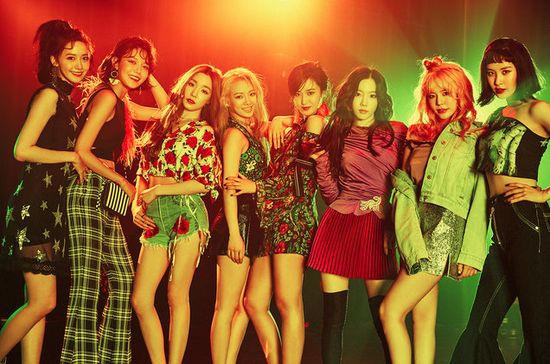 Girls' Generation (소녀시대 (So Nyeo Si Dae or SNSD) in Korea, and 少女時代 (Shoujo Jidai) in Japan) is a Korean pop girl group formed by SM Entertainment. Prior to their debut, they were described as the female Super Junior by SM Entertainment. They became well known after their hit 2009 song "Gee".

The group debuted in Japan under Universal Music in August 2010 with the release of a commemorative DVD. They have been under indefinite hiatus since 2017 when their contracts expired. Members Tiffany, Sooyoung, and Seohyun were the only members not to renew. Despite their departure from SM Entertainment, the girls remain members of the group. 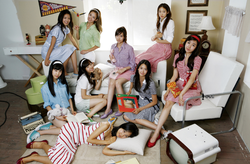 Girls' Generation were initially known as "Super Girls", a fan made name, before their debut. Touted as the female Super Junior by SM Entertainment, the group was announced to include members with diverse talents able to speak in different languages such as English, Chinese, and Japanese fluently for future expansion in different markets. Initially 11 members were in the group. However, 2 members withdrew; one of them being So Yeon who is now in T-ara and the other is Chanmi who is now in Coed School. The members were unveiled individually from July 7, 2007 to the 14th.

They unofficially debuted at M.net's "School of Rock" on July 18, 2007 where they performed "Dasi Mannan Segye (Into the new world)", which later became their debut single. On July 27, 2007 a documentary aired on "M.net" titled Girls' Generation Goes To School, which showed behind the scenes footage of the group, including the preparation of their unofficial debut performance at "School of Rock". 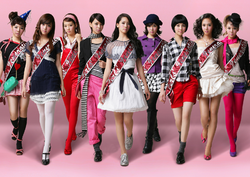 Following the success of "So Nyeo Si Dae (Girls' Generation)", it was announced on January 8, 2008 that they would began promoting "Kissing you" as their second single. They debuted the performance of "Kissing you" on January 13, 2008 at Inkigayo, and released the music video on January 14th, which featured Super Junior member Donghae as their special boyfriend. "Kissing you" became #1 on Music Bank, and was #1 twice on Inkigayo and M!Countdown.

Due to popularity, they released a repackaged album titled Baby Baby on March 17, 2008. The song "Baby Baby", was used as the third single, and the debut performance was on April 13, 2008 at Inkigayo. So Nyeo Si Dae has sold 121,143 copies to date. On October 8, 2008, Girls' Generation's Factory Girl, a reality show featuring Girls' Generation as Elle Girl editors, was broadcast on M.net until it's last episode on December 17, 2008. 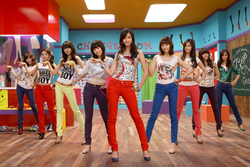 During promotional activities for Baby Baby, Girls' Generation started individual solo activities. Taeyeon began hosting as a disc jockey with Super Junior's Kang In, Yoona was cast as the lead actress in the drama Neoneun Nae Unmyeong, and besides endorsing products and lending their vocals to drama soundtracks, the group remained in indefinite hiatus for nine months. However on December 26, 2009 solo teaser posters of each Girls' Generation member were erected all over Seoul.

On December 28, 2008 SM Entertainment confirmed that their album would be released on January 7, 2009 and their debut performance would be held at "Music Bank" on January 9, 2009. SM Entertainment stated "You will be able to feel an upgraded charm to Girls' Generation with this new album. Fan's eyes and ears will rejoice after seeing the bright and cute charms that only Girls' Generation can have".

On January 2, 2009, SM Entertainment revealed an MV teaser for "Gee", the title track to their debut mini-album Gee. Shortly after the physical release of Gee on January 7, 2009, the title track hit #1 on various music portal sites such as MelOn, Dosirak, and Cyworld. However, unlike previously announced, Girls' Generation held their come back stage at MBC "Music Core" on January 10, 2009 due to a ban "Music Bank" officials placed on the group. They performed "Gee" and "Himnae! (Way To Go)". A certain part of the choreography for "Gee" called the "Crab Leg Dance" by fans became immensely popular amongst the public. The group won their first "Mutizen" at "Music Bank" on January 16, 2009 despite their absence. On February 22, 2009 Girls' Generation won "Song of the Month" at the "Cyworld Digital Music Awards" for "Gee", and SM Entertainment released an official MV for "Himnae! (Way To Go)" on March 5, 2009. 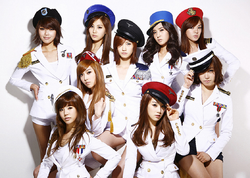 Girls' Generation's come back date, set for June 25, 2009, was confirmed on June 14, 2009. A teaser image for their second mini-album was also revealed. Girls' Generation stated "We are really excited to be coming back with a new concept and music. We are working extremely hard to come back with more charisma than ever, so please wait for us and support us." The last episode of Girls' Generation's Horror Movie Factory also ended on June 14th due to low ratings. The lead single for their 2nd mini-album was revealed to be "Sowoneul Malhaebwa (Genie)" on June 16, 2009 and photo's from the set of the music video were also released.

Regardless of the controversy, "Sowoneul Malhaebwa (Genie)" reached the #1 spot on online music charts less than 24 hours after it release. However, the mini-album was postponed to June 29, 2009 due to the mini-album cover. SM Entertainmet stated "We used military icons on album cover, however it was interpreted and understood in a way we didn’t expected. So we are planning to delete the part and put an icon of South Korean supersonic jet T-50". 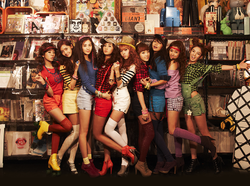 Girls' Generation teamed up with f(x) to release a digital single called "Chocolate Love" to endorse the LG Cyon "Chocolate" cellphone. The single consisted of two slightly different versions sung by both groups: f(x)'s "Electronic Pop" version and Girls' Generation's "Retro Pop" version. Produced by the Swedish song-writing duo Bloodshy & Avant, "Chocolate Love" was released on October 8, 2009 through various online music sites. Girls' Generation released the music video for their version of "Chocolate Love" online on October 14, 2009 and along with f(x), the group held a showcase for the single which aired on the popular online streaming service "GOM TV". Despite not receiving any radio airplay or being promoted on music shows, the single reached the #2 position on the online music chart "MelOn".

Girls' Generation's announced their first Asia tour called "Into the new world" in early November. They began their first solo tour with two scheduled dates on December 19th and 20th held at the Seoul Olympic Stadium; tickets sold out in 3 minutes. There the group unveiled two new songs called "Show! Show! Show!" and "Geunyang Utja (Be Happy)", which were later revealed to be tracks on their second studio album Oh!. Due to the success of the Seoul concerts, Girls' Generation held two encore concerts on February 27, 2010 and the 28th at the "Seoul Olympic Stadium". Besides South Korea, their 1st Asia tour consisted of one concert at Shanghai, China on April 17, 2010 and one concert at Bangkok, Thailand on July 24, 2010. 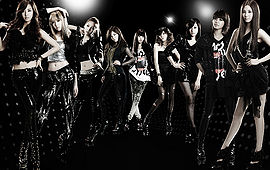 SM Entertainment revealed a teaser photo and the name of Girls' Generation's second album and title track called Oh!, on January 20, 2010. "Oh!" was described as an "electro-pop song", and was announced to have been composed by Kenzie, who has written and composed previous popular Girls' Generation tracks such as "Dasi Mannan Segye (Into the new world)" and "Merry-go-round". Their come back was scheduled to be held at Music Core on January 30, 2010, and the track list and cover for the album was released. The music video teaser for "Oh!" was released on January 22, 2010, which received over a million views on Youtube and "GOM TV" in less than two days and made Naver servers inaccessible due to the amount of viewers it received. "Oh!" was released on various online music portal sites on January 24, 2010, which quickly climbed to the #1 spot instantly after its release; the song also climbed to the #1 spot faster than "Sowoneul Malhaebwa (Genie)". The music video for "Oh!" was released on January 26, 20109, and the ending of the music video revealed the nine Girls' Generation members dressed up as cute cheerleaders looking upon another Girls' Generation dressed in black sexy clothing. SM Entertainment confirmed that the teaser at the end was a glimpse of a follow-up track; which was later revealed to be "Run Devil Run".

Before it's release, Oh! racked up a record breaking amount of pre-orders; 59,500 online orders and 90,390 offline orders which amounted to a total of 149,790 pre-orders. "Oh!" was released on January 28, 2010 and sold approximately 30,000 copies in one day. Girls' Generation made their come back on Music Core where they performed "Show! Show! Show!" and "Oh!". The group then won the "Daesang", which is the highest award artists can receive, "Bonsang", and "Digital Music Daesang" at the 19th Seoul Music Awards on February 3, 2010. 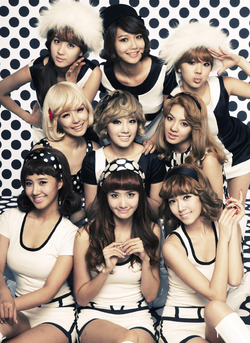 On August 11, 2010, Girls' Generation debuted in Japan under the stage name Shoujo Judai (少女時代) with the DVD Shoujo Jidai Tourai ~Hatsu Rainichi Kinen Ban~, which contained all their music videos released in Korea. On September 8, they released their debut Japanese single, "GENIE", which was a Japanese version of their Korean song "Sowoneul Malhaebwa (Genie)", included on the same titled mini-album Sowoneul Malhaebwa (Genie). The single peaked at #4 on the Oricon charts. On October 20th, Girls' Generation released their second Japanese single, "Gee", another remake of one of their hit Korean songs. It peaked at #2 on the Oricon charts.

On October 27, the group released their third mini album, Hoot. The title track, "Hoot", was released on October 25 at 10am KST through various online music websites. Prior to their comeback, after just releasing "Hoot" on October 25, it took less than 7 minutes for the song to dominate 7 major Korean realtime music charts, topping every single one of them at #1 include Monkey3, Dosirak, Melon, Soridaba, Cyworld, Bugs and Daum. SM Entertainment released "Hoot" music video on October 28, 2010 on SM homepage and their official Youtube channel. The music video also featured Super Junior's member Siwon. In less then 24 hours the video hit more than 1 million viewers on Youtube. They won their first award on Music Bank on 5th November 2010. On December 22, 2010, a special edition of Hoot was released in Japan, including additional tracks from previous albums. The release rose to the #2 position on the Oricon charts and selling 21,000 copies on the first day, faring surprisingly well considering the tracklist itself is entirely in Korean. 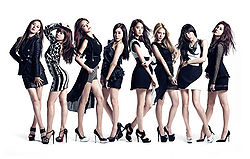 Girls' Generation in their current line-up (2014) 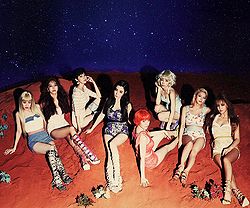 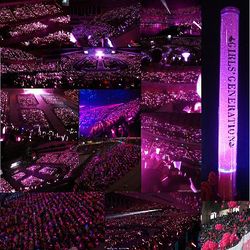 Into the new world

I GOT A BOY