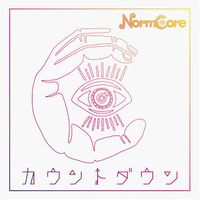 "Countdown" is the third single released by NormCore and their first digital release. It was released in three versions: a limited CD+DVD edition, a "Meitantei Conan" edition and a regular CD edition. The "Meitantei Conan" also contained a random badge (out of three) with characters from the anime. The title song was used as the 47th opening theme for the anime Meitantei Conan, through episodes 903-915. The single reached #31 on Oricon and charted for three weeks.