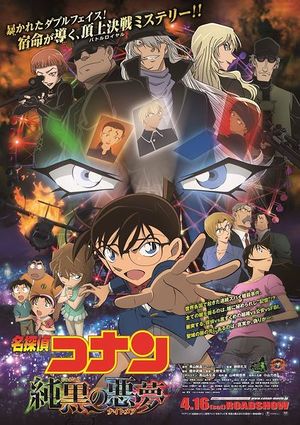 Meitantei Conan Junkoku no Nightmare (名探偵コナン 純黒の悪夢 Detective Conan The Darkest Nightmare) is the twentieth movie released for the Meitantei Conan anime. It was released in Japan on April 16th, 2016. The movie was the 3rd with most income in 2016 compared to other Japanese films, with an income of 6.33 billion yen.[1]

On a jet-black night, a spy breaks into the National Police Agency to steal confidential data belonging to several national intelligence agencies, including the British MI6, German BDN, and American CIA and FBI. Just before the spy can steal the data, Tohru Amuro arrives with his secret police officers. The spy makes a getaway in a stolen car, but Amuro catches up on the highway. Before they are about to cause a huge wreck, bullets from the rifle of the FBI's Shuichi Akai rip through the spys car, sending it careening off the highway and falling The next day, Conan and his friends meet up at the Tohto Aquarium, which is celebrating its reopening. Under the centerpiece of the park, a massive Ferris wheel, they find a good-looking woman standing alone and injured. Conan notices that she has different-colored irises, also known as "odd eyes". However, the woman is suffering from memory loss so severe that she doesn't even know her own name. The phone she is carrying is broken. Conan and his friends promise to stay with her and help her recover her memory. In the shadows, Vermouth has overheard everything. Stepping back from the scene, she takes out a silencer and after it is attached, speaks into the microphone: "That's what I intend to do, Gin." Dark memories open the door to the showdown battle!

The soundtrack album was released on April 13th, 2016.

The regular edition DVD includes a postcard and a disc with the movie, its theatrical trailer and the announcement trailer. The special edition also includes a clear file and an extra DVD with the 813th episode of the anime, Yuuki Amami Special, Black notebook and ballpoint pen set and Postcards. The Blu-ray editions have the same contents as their DVD counterparts.