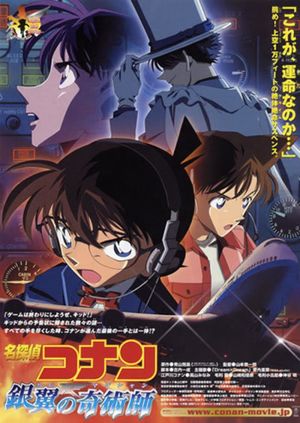 Meitantei Conan Ginyoku no Magician (名探偵コナン 銀翼の奇術師; Detective Conan Magician of the Silver Sky) is the eighth movie released for the Meitantei Conan anime. It was released in Japan on April 17th, 2004. The movie was fifth with most income in 2004 compared to other Japanese films, with an income of 2.8 billion yen.[1]

A famous actress receives a note that declares Magic Kid will steal her star sapphire called jewelry of the fortune. The night he had announced his steal is the final day of her play at the new theater.

Conans chance to catch Magic Kid comes when the final scene commences on stage. However, the disguised Magic Kid suddenly runs onto the roof of the theater and flies away into the sky.

In a jet plane headed for Hokkaido, Conan and his friends are on board because the actress invited them to the party in her cottage. During the flight, the actress falls on the floor after eating a chocolate. Conans new gadget will be introduced in this film. How will our hero Conan solve this case in such a small and crowded area of the plane?

The soundtrack album was released on April 14th, 2004.

This is the last movie to have a VHS release. The DVD also includes the movie trailer, and Blu-ray has an additional mini-booklet explaining the film.