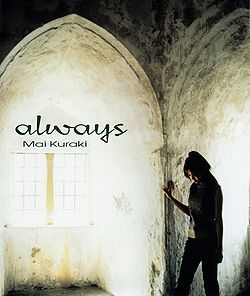 always is Kuraki Mai's ninth single. always was used as the 12th ending theme for the anime Meitantei Conan through the episodes 233-247, and was also the theme song for the Meitantei Conan movie Tengoku he no Countdown. It reached #2 on Oricon, charted for seven weeks and sold 219,940 units. It also reached #89 on the yearly Oricon charts for 2001.