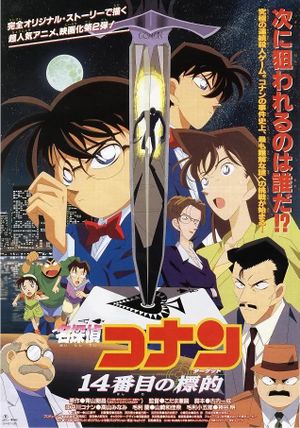 Meitantei Conan 14 Banme no Target (名探偵コナン 14番目の標的; Detective Conan The Fourteenth Target) is the second movie released for the Meitantei Conan anime. It was released in Japan on April 18th, 1998 and English-dubbed on November 20th, 2007. This movie was the 7th with most income in 1998 compared to other Japanese films, with an income of 1.05 billion yen.[1]

This story takes place in a futuristic underwater restaurant called the "Aqua Crystal" which resembles a space base. The men and women who have gathered at this establishment range from a beautiful fashion model, a handsome newscaster, to our renowned and infamous "Detective Conan."

While enjoying the finest and most exquisite red wine during their meal, the patrons at this restaurant are completely unaware that their lives are in danger and threatened by a deranged serial killer. This evil and psychopathic murderer abides by his master plan to execute his killings in a neat and orderly fashion. After each murder, a tramp card is left behind on purpose by the killer whose number always coincides with the name of the victim on the scene.

With this crazed assassin on the loose and nobody able to subdue him, there seems little that anyone can do to escape from this unknown and dangerous criminal. The patrons at the restaurant are suddenly trapped in an undersea den of terror as all the doors become locked making an escape all but impossible.

It is all up to the notorious and heroic "Detective Conan" to solve this case as soon as possible to rescue all the nervous and frightened souls and deliver them from this dangerous and deadly predicament.

The soundtrack album was released on April 15th, 1998.