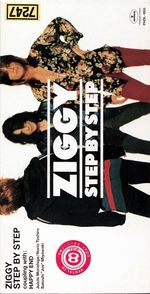 "STEP BY STEP" is the eleventh single released by ZIGGY. The title track was used as the first ending theme for the anime Meitantei Conan. The single reached #10 on the weekly Oricon charts and charted for seven weeks.

"STEP BY STEP" is also found on ZIGGY's eight album WHAT NEWS!? as track #1.