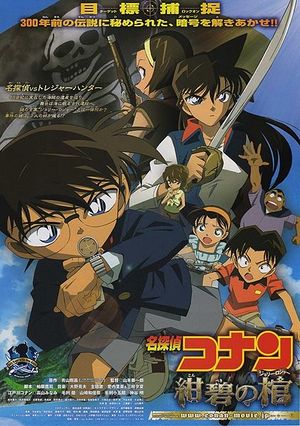 Meitantei Conan Konpeki no Jolly Roger (名探偵コナン 紺碧の棺; Detective Conan Jolly Roger in the Deep Azure) is the tenth movie released for the Meitantei Conan anime. It was released in Japan on April 21th, 2007. The movie was the 10th with most income in 2007 compared to other Japanese films, with an income of 2.53 billion yen.[1] It was nominated for the 31st Japan Academy Prize for "Animation of the Year".

This cases stage is set on the beautiful island of Komijima. Our famous hero Conan and his faithful companions just happen to visit this paradise only to stumble across some evil-looking treasure hunters.

An old sword and pistol in the ancient undersea palace that surrounds the island are taken by two notorious and beautiful lady pirates.

The mystery of the dynamic duo beauties items seem to be shrouded in secrecy. Amidst all the chaos and excitement, Conans classmates are enjoying a treasure hunting quiz tour. What Conan does not realize is that this opens the path to lead him to the world of these treasure hunters.

The soundtrack album was released on April 12th, 2007.

The DVD includes the movie in Dolby Digital 5.1 Audio and Widescreen. The Blu-ray format has the same content as the DVD, but also has an additional mini-booklet explaining the film and the BD-live function.