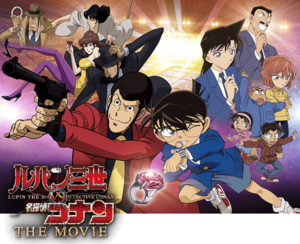 Lupin Sansei VS Meitantei Conan THE MOVIE (ルパン三世VS名探偵コナン THE MOVIE; LUPIN THE 3rd VS DETECTIVE CONAN THE MOVIE) is a special movie released for the Meitantei Conan and Lupin III animes. It was released in Japan on December 3rd, 2013. It is the second crossover between these two animes, the first being in 2009 through a television special. The movie was the 6th with most income in 2014 compared to other Japanese films, with an income of 4.26 billion yen.[1] It was nominated for the 37th Japan Academy Prize for "Animation of the Year".In 2015 was aired on NTV and achieved 14,9% audience share.

The story follows Conan Edogawa who sets out to apprehend Arsène Lupin III, the suspect of stealing a jewel called the Cherry Sapphire.

Lupin Sansei VS Meitantei Conan THE MOVIE has no ending theme. Instead, they used the main themes for both series, with different arrangements.

The soundtrack album was released on December 2nd, 2013.