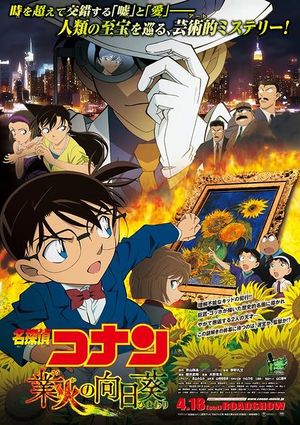 Meitantei Conan Gouka no Himawari (名探偵コナン 業火の向日葵 Detective Conan Sunflowers of Inferno) is the ninteenth movie released for the Meitantei Conan anime. It was released in Japan on April 18th, 2015. The movie was the 4th with most income in 2015 compared to other Japanese films, with an income of 4.48 billion yen.[1]

Conan`s rich friend, Sonoko, is in auction hall with her famous grandfather in a skyscraper in New York. The highlight of this auction is one of Vincent Van Gogh`s Master-piece in his Sunflowers series. It claims to be newly discovered addition to the seven Arles series of Sunflowers. However, the painting looks exactly like an authenticated one found previously in Japan called The Second Sunflowers. Nobody knows which one is real. Suddenly, Sonoko`s grandfather wins the final bid for the picture.

He decides to open an exhibition and display a complete collection of Van Gogh`s Sunflowers, with addition of this painting. When suddenly during exhibition, they discover a calling card warning of an imminent heist left by the infamous thief known as Kid. True to his word, Kid the Phantom Thief makes his appearance before vanishing with the painting into the night sky.

The soundtrack album was released on April 15th, 2015.

The regular edition DVD includes a postcard and a disc with the movie, its theatrical trailer and the announcement trailer. The special edition also includes a photo frame and an extra DVD with the 774th episode of the anime, an extra mystery case and a "NO MORE Movie Thief x Detective Conan Sunflowers of Inferno" clip. The Blu-ray editions have the same contents as their DVD counterparts.