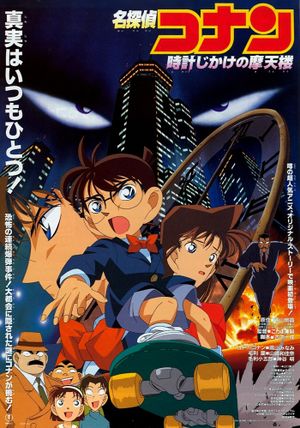 Meitantei Conan Tokei Jikake no Matenrou (名探偵コナン 時計じかけの摩天楼; Detective Conan The Time-Bombed Skyscraper) is the first movie released for the Meitantei Conan anime. It was released in Japan on April 19th, 1997 and English-dubbed on October 3rd, 2006. This is the only Meitantei Conan movie not to be one of the highest-grossing movies in their year of release.

Our young and innocent schoolboy Shinichi Kudo assumes the alias of Conan and is challenged tenaciously by a terrorist bomber who has posed a major threat to a large and heavily populated city. While tracking down this culprit, Conan must go through a series of complicated and thrilling ordeals, but being the diligent detective, he is able to narrow the focus of his investigation down to one person.

The soundtrack album was released on April 23rd, 1997.