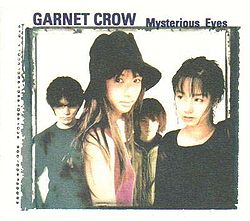 "Mysterious Eyes" is GARNET CROW's debut single. It was released simultaneously with the single "Kimi no Uchi ni Tsuku Made Zutto Hashitte Yuku". The title track was used as the seventh opening theme for the anime Meitantei Conan through episodes 168-204. First press edition included an original Meitantei Conan card. The single reached #20 on the weekly Oricon charts, charted for 11 weeks and sold 61,040 copies.