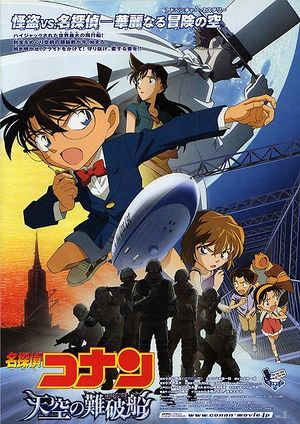 Meitantei Conan Tenkuu no Lost Ship (名探偵コナン 天空の難破船; Detective Conan The Lost Ship in The Sky) is the fourteenth movie released for the Meitantei Conan anime. It was released in Japan on April 17th, 2010. The movie was the 10th with most income in 2010 compared to other Japanese films, with an income of 3.2 billion yen.[1] It was nominated for the 34th Japan Academy Prize for "Animation of the Year".

It is time once again for our hero, Detective Conan and his arch nemesis, the Magic Kid to face each other and battle it out - but this time with a little twist - the two will also have a common enemy to worry about!

On August 7th, a group of seven that calls themselves the Red Siamese Cat invades a high security laboratory that handles some of the worlds deadliest bacteria. Afterwards they reveal that they now have in their possession the bacteria that, if the public is exposed to it, 80% will perish, and add that within the next 7 days they will take the next step. In the meantime, a proud owner of a magnificent jewel named the Lady Sky challenges Magic Kid by inviting him to come steal the jewel from him, within the 6 hours the jewel will be on open display in the sky aboard a tightly-secured airship.

Magic Kid, of course, graciously accepts the challenge, and thus begins another fast-paced adventure led by Detective Conan. Will Magic Kid in his signature white suit and cape manage to take off with the jewel? Will Conan be able to protect his girlfriend, Ran from being exposed to the deadly bacteria? Or will time finally run out on everyone?

The soundtrack album was released on April 14th, 2010.

The DVD includes the movie in both Dolby Digital 5.1 Audio and Widescreen. The regular edition includes the movie and its trailer, and a postcard drawn by Aoyama Gosho. The special edition has an extra DVD with the OVA Magic File 4 and the 'Detective Conan Memorial Show', and Kid's Manifesto Sticky Notes.