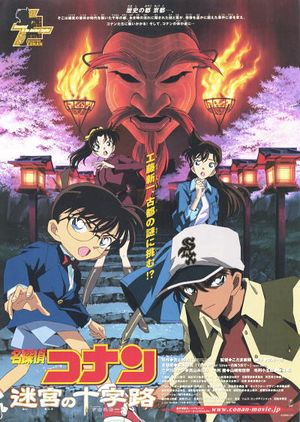 Meitantei Conan Meikyuu no Crossroad (名探偵コナン 迷宮の十字路; Detective Conan Crossroad in the Ancient Capital) is the seventh movie released for the Meitantei Conan anime. It was released in Japan on April 19th, 2003. This was the first film in full-length traditional digital paint. The movie was the third with most income in 2003 compared to other Japanese films, with an income of 3.2 billion yen.[1]

Conan visits Kyoto along with his girlfriend Ran, her best friend and Kogoro to find out about the national treasure that had been stolen eight years ago from the distinguished Sanno Temple with a long historical standing. The only clue to the whereabouts of the treasure is to decode a mysterious picture. Conan, who suspects that the theft case may in some way be connected to the serial murder case, sets off to resolve the case. There is a youth who visits Kyoto just a bit earlier than Conans group to investigate the murder case. It is Heiji. Although the two boys are usually in strife with each other, this time, the two super detectives join hands to save their best friend in the most unexpected way. A childrens song opens the door of memory that leads to reveal the truth that is hidden in the picture.

Will Conan be able to walk out of the crossroad of a hundred years of history?

The soundtrack album was released on April 16th, 2003.

The DVD includes the movie trailer, and Blu-ray has the same contents as the DVD but with an additional mini-booklet explaining the film.