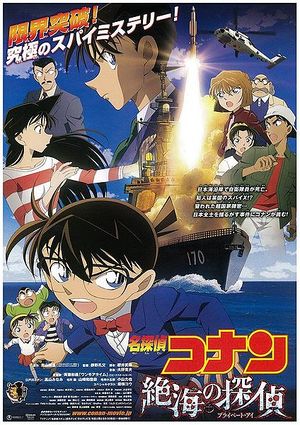 Meitantei Conan Zekkai no Private Eye (名探偵コナン 絶海の探偵; Detective Conan Private Eye in the Distant Sea) is the seventeenth movie released for the Meitantei Conan anime. It was released in Japan on April 20th, 2013. This film depicts the interior of the Aegis, a ship operated by Japans Maritime Self-Defense Force. The movie was the 4th with most income in 2013 compared to other Japanese films, with an income of 3.63 billion yen.[1]

This case begins when a suspicious vessel appears in the sea at dawn, carrying a bomb. Meanwhile our hero, Conan, is taking a cruise on the Japan Maritime Self-Defense Forces state-of-the-art Aegis Destroyer.

Its an unforgettable experience for Conan and his young detective friends, until the fun is cut short by a sudden thunderous and menacing sound. Soon enough, a body is discovered with its left arm missing! Moreover, the body belonged to a man in the Self-Defense Force! Conan cant help but notice that there are a few strange details in this crime scene...

It isnt long into his investigation that Conan discovers that a mysterious foreign spy known as "X" has infiltrated the ship. But who is this man? And how is he related to the suspicious vessel?

The mysterious spy soon casts his menacing shadow over Conan and his friends. They have no idea that they have stumbled upon a vast conspiracy that threatens to destabilize all of Japan!

The soundtrack album was released on April 17th, 2013.

The regular DVD edition includes the movie, its trailer and the announcement trailer. The special edition has an extra DVD with the 694th episode of the anime, an extra mystery case and an Aegis Navigation video clip. It also includes a postcard. The Blu-ray editions have the same contents as their DVD counterparts.