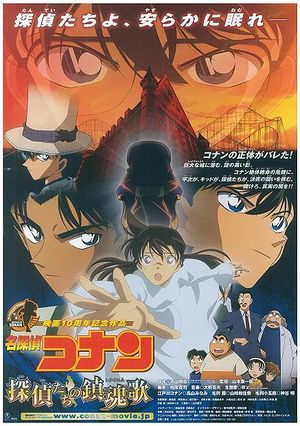 Meitantei Conan Tanteitachi no Requiem (名探偵コナン 探偵たちの鎮魂歌; Detective Conan The Private Eyes' Requiem) is the tenth movie released for the Meitantei Conan anime. It was released in Japan on April 15th, 2006. The movie was the 10th with most income in 2006 compared to other Japanese films, with an income of 3.03 billion yen.[1] It was nominated for the 30th Japan Academy Prize for "Animation of the Year".

The big stage in this time is huge amusement park adjoining a luxurious hotel. Receiving special ID wrist band for special guest, Conans classmates enjoy attractions in the amusement park. Their targeted attraction is thrilling rollercoaster however, only Conan has to be left in the room at the hotel because someone hiding his face asks him to solve some special case as number one detective. This special client shows Conan how he did away with the detectives in the past who were hired by him by using a special kit. The detectives who are incompetent are unworthy to live. This is always this clients philosophy. In this time, this extreme client confesses about the countdown to explosion of Conan and his friends' timebombed wrists. Conan realizes that he should solve the case asked by this crazy client during the limited hours. How can Conan help his innocent friends while trying to solve this case?

The soundtrack album was released on April 12th, 2006.

This is the first time the movie is released in both a regular and a limited edition. This was done as commemoration for the anime's 10 years anniversary. The regular edition contains the movie and trailers, while the limited edition includes a second disc wth several 'Special Thanks' commercials.