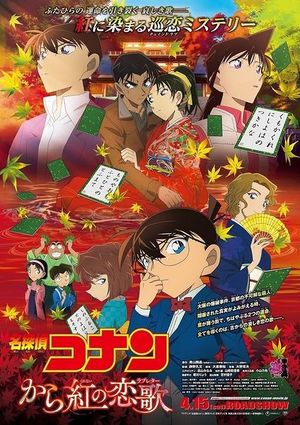 Meitantei Conan Karakurenai no Love Letter (名探偵コナン から紅の恋歌 Detective Conan The Crimson Love Letter) is the twenty-first movie released for the Meitantei Conan anime. It was released in Japan on April 15th, 2017. It was the movie with most income in 2017 compared to other Japanese films, with an income of 6.89 billion yen.[1] It's the first Meitantei Conan to reach the peak in ratings. The film was nominated for the 41st Japan Academy Prize for "Animation of the Year".

A bombing case at Nichiuri TV in autumn. The Satsuki Cup, which crowns the winner of Japan's Ogura Hyakunin Isshu based competitive karuta tournament, is currently being filmed inside the facility. The incident results in a big commotion and, while the building is burning to ashes, the only people left inside are Heiji and Kazuha. They get rescued just in time by Conan, who rushes to the scene. Both the identity and motive of the bomber are unknown.

While confusion takes over due to the explosion, Conan meets a mysterious beautiful girl who claims she is "Heiji's fiancée". Her name is Momiji Ooka and she is the Kyoto High School karuta champion. As fate would have it, Kazuha is going to face Momiji in the Hyakunin Isshu competition, so she begins to train with the help of Heiji's mother, Shizuka, who is a skilled Karuta player.

At the same time, in a Japanese house in Arashiyama, Kyoto's outskirts, the reigning Satsuki Cup champion is murdered. Pictures of the crime scene reveal Momji's presence. Additionally, several Karuta cards were spread around the victim.

Conan and Heiji, along with the Osaka and Kyoto police departments, begin their investigation on the Satsuki Cup and the related murder case. As the inquiry goes on, they come across a secret connected with the Hyakunin Isshu.[2]

The soundtrack album was released on April 12th, 2017.

The regular edition DVD includes a postcard and a disc with the movie, its theatrical trailer and the announcement trailer. The special edition also includes Momiji Ooka's pass case and photos and an extra DVD with the 855th episode of the anime, and special Valentine and White Day short movies. The Blu-ray editions have the same contents as their DVD counterparts.