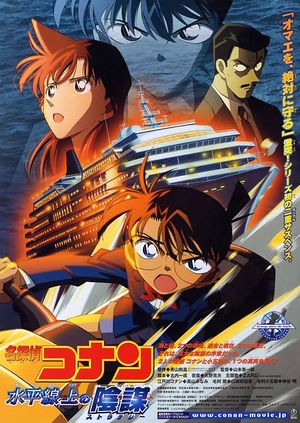 Meitantei Conan Suihei Senjou no Strategy (名探偵コナン 水平線上の陰謀; Detective Conan Strategy Above the Depths) is the ninth movie released for the Meitantei Conan anime. It was released in Japan on April 9th, 2005. The movie was the 11th with most income in 2005 compared to other Japanese films, with an income of 2.1 billion yen.[1]

Our detective hero Conan and his friends are on a maiden voyage in this time. They enjoy their dinner as guests. Then one of the guests, as script writer, goes back to his room. After the dinner, Conan and his fellows start to play hide-and seek. But nobody knows that this game turns out to be an overture to an ominous murder case. Ran, who acts as Conans elder sister, is good at hide-and seek and becomes the only person who cannot be found. Ran's best friend Sonoko starts looking for her and find that Ran is implicated in a crime. Can our Conan solve the case?

The soundtrack album was released on April 6th, 2005.

The DVD also includes the movie trailer. The Blu-ray format has the same content as the DVD, but also has an additional mini-booklet explaining the film and the BD-live function.