Meitantei Conan Tengoku he no Countdown

From generasia
(Redirected from Tengoku he no Countdown)
Jump to: navigation, search 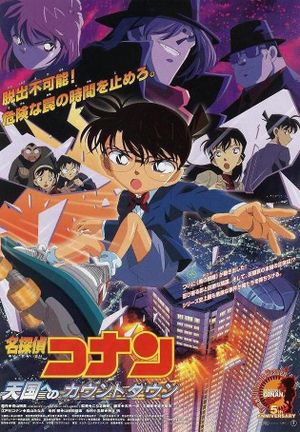 Tengoku he no Countdown Movie Poster

Meitantei Conan Tengoku he no Countdown (名探偵コナン 天国へのカウントダウン; Detective Conan Countdown to Heaven) is the fifth movie released for the Meitantei Conan anime. It was released in Japan on April 21st, 2001 and English-dubbed on January 19th, 2010. It was the 7th movie with most income in 2001 compared to other Japanese films, with an income of 2.9 billion yen.[1]

This time out, the stage of this 5th film is set at the tall twin tower buildings, designed by the apprentice of Teiji Moriya who appeared in the 1st film.

On the way back from camping, our hero Detective Conan (a.k.a. Shinichi Kudo) and his friends stop by the tall twin towers that are just about to be completed. Later, they happen to run into Conans girlfriend and her father Detective Mouri. They also get to know a beautiful lady named Tokiwa, the owner of the hi-tech towers, and many suspicious-looking people seeking the concession to develop the valuable real estate.

Then the first murder takes place, and at the same time, a red Porsche appears. It is driven by the men in black, who forced Shinichi to drink the mysterious liquid that changed him into a little Detective Conan. In spite of the murder, this attractive woman insists on holding a ceremony to celebrate the completion of the tall buildings, on the planned day. Now, the endless serial murders are about to begin on this stylish, hi-tech stage, 300 meters above the ground. Can Conan get out of the nearest floor to Heaven?

The soundtrack album was released on April 11th, 2001.