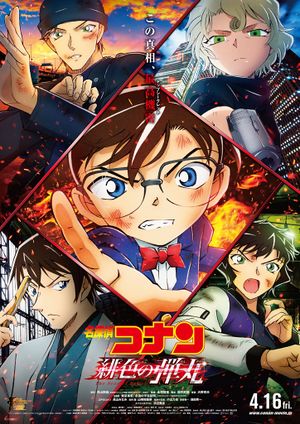 Meitantei Conan Hiiro no Dangan (名探偵コナン 緋色の弾丸 Detective Conan The Scarlet Bullet) is the twenty-fourth movie released for the Meitantei Conan anime. It was initially scheduled to be released in Japan on April 17th 2020, but was postponed due to the 2019–20 coronavirus pandemic to April 16th, 2021.

Japan is about to celebrate Tokyo, the world ’s largest sports festival, “WSG-World Sports Games”. In line with the opening ceremony, it was announced that the world's first "Vacuum Superconducting Linear" boasting a maximum speed of 1,000 km/h, combining all Japanese technologies, will be opened between Shin-Nagoya Station and Shibahama Station, which will be established in Tokyo. As the world's attention is gathered, suddenly an incident occurred at a party venue where famous tournament sponsors gathered, leading to an abnormal situation where tops of companies were kidnapped one after another. Behind them were Shuichi Akai, who monitors the incident, and FBI, who waits for orders from Akai. Conan's reasoning reveals the relevance of the apocalyptic WSG kidnapping incident that occurred in Boston, USA 15 years ago, and that the incident was also under the jurisdiction of the FBI. Is this a coincidence? What is going to happen in Japan, where many people from all over the world gather?[1]

The soundtrack album was released on April 14th, 2021.