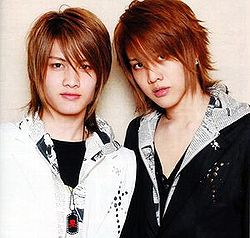 Golf-Mike (กอล์ฟ-ไมค์) (known as GOLF & MIKE in Japan) is a Thai/Japanese pop unit composed of the brothers Pichaya (Golf) and Pirath (Mike). In Japan they are produced by the talent agency Johnny's Entertainment and in Thailand they are part of the group G-Junior on the GMM Grammy Label. 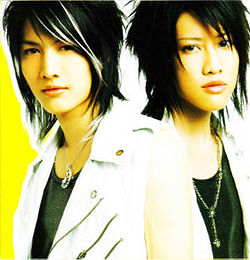 Pirath and Pichaya come from a musical family as their older brothers, who go by Sand and Bank, were also popular musicians in Thailand in the late 90s. When Golf and Mike were 14 and 11, they tried out for the group G-Junior. After a year of training they passed the audition and began working on their first album, GOLF-MIKE, released three years later.

Golf & Mike debuted during Thongchai McIntyre's For Fan concert in 2002. After their debut, they traveled to Japan and participated in concerts with popular J-Pop groups NEWS and Ya-Ya-yah. They covered Tackey & Tsubasa's Epilogue for their debut album as well as Yume Monogatari during concerts as they both idolize Tackey (Takizawa Hideaki). Their participation in the Japanese music scene did not end there, however in 2006 they were put into a group under Johnny's Entertainment with Yamashita Tomohisa called Kitty GYM. They were also due to perfom with ARASHI and G-JR in a J-Pop/Thai-Pop concert on October 7 at the Impact Arena, Bangkok, to celebrate Thailand's ties with Japan but the J-Pop group were sent back to Japan a few days prior to the concert date due to Thailand's current unstable political state. Korean stars they have interacted with include Byul.

Though Golf and Mike are brothers, the third and fourth children of five respectively, their personalities are very different; they are 'like black and white', as Mike once said in an interview. Because they study in an international school and have spent time in Australia studying, they are fluent in English and can also speak some Japanese in addition to Thai. They enjoy normal teenage things, such as hanging around the Siam Center, a popular shopping center for teenagers in Thailand. Both are also interested in graphic design and art, as well as video games and manga and are very good at drawing. Their Golf-Mike logo was designed by Golf and the Golf-Mike monkeys were also drawn by him. They own a blog, however, due to their collective inability to type in Thai, they only write in English.