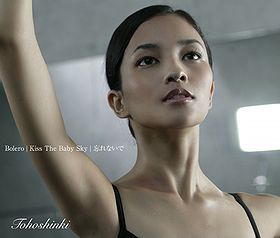 Kiss The Baby Sky is a J-Pop song released by Tohoshinki as the second song of the triple A-side single Bolero / Kiss The Baby Sky / Wasurenaide. The song was used as the TV program Zoom in!!SUPER's weather forecast section song. The PV features three announcers of the program, Hatori Shinichi, Nishio Yukari and Oguma Mika.

Along with Wasurenaide, is the first released song written and composed entirely by only one member of Tohoshinki. Although he doesn't appear on the credits, Yoochun stated that his brother helped him with the English rap.

The song includes rap verses sang by Yoochun and Yunho, but it's lyrics aren't listed in the booklet. These are:

Yo, You know what I'm talking about baby?
Ah, just trying to say
You know what
New story
Another original
Come on

Yeah, How you guys doing so far?
You guys with me?
Come on

TVXQ, My Hero, My Max, My Uknow, My Xiah & Micky
We're the one
Eternally


Everytime I see your smile on the pictures
My heart cant imagine how it wants it's supposed to feel
Im singing...
It's my voice
All your hugs and kisses
Again, We can go back to our good old days


All I do is reminisce this time
Today it was you and I
I know you can give me no more
Every line you wrote..
The smile
Time to move on.