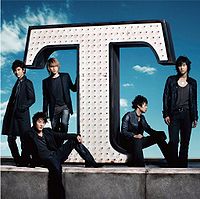 TRICK is a J-Pop song released by Tohoshinki and included in their third Japanese album T album as track #1. The song is a compilation of all the melodies from the group songs of the Trick Project with different arrangement and tempo to fit in a single song. The introduction is the continuation of the last seconds of the song Keyword, the first A-side from last installment of the project, although the album was released two months before the singles.