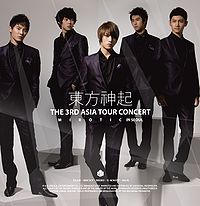 XIAHTIC is a K-Pop song released by Dong Bang Shin Ki and included in their third live album The 3rd Asia Tour Concert 'Mirotic' in SEOUL. The song, only sang by Xiah, was later released in Japanese as B-side for Tohoshinki's 29th single BREAK OUT!.

Xiah composed the song for his solo performances at 3rd Asian tour and in July, 2009, he performed the Japanese version of the song at Tohoshinki's 4th live tour in Japan.