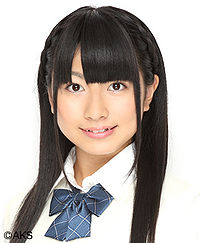 Fujimoto Mitsuki (藤本美月) was a Japanese pop. She is a former member of SKE48's Team KII.