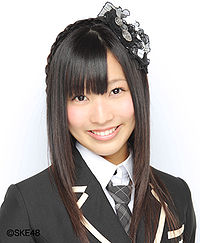 Shinkai Rina is a Japanese idol singer. She is currently part of SKE48's Kenkyusei (Research Students). She was previously part of SKE48's Team S however from March 2010 it was announced that she & fellow Team S member Mori Sayuki were demoted to Research Students in order to concentrate more on High School. Its unknown whether Rina will return back to Team S or whether she will be part of the yet to be announced Team E.

It was announced on SKE48's main website that Shinkai Rina had graduated on the 8th May 2010, with her profile being removed on from the Research Students section almost immediately after the announcement was made.