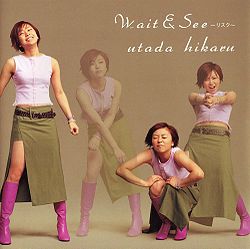 "Hayatochiri" is an R&B song recorded by Utada Hikaru. It was first released in 2000 as the B-side to her fifth single, "Wait & See ~Risk~". The track was later remixed by Utada and used as a Bonus Track on her sophomore studio album Distance. In 2018, the original version received a remaster and was featured on the digital edition of Distance.

There are three versions of "Hayatochiri" to be found in Utada's discography. These different versions are: