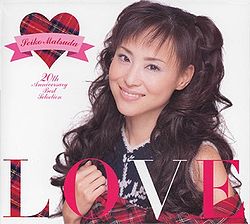 『LOVE』 Seiko Matsuda 20th Anniversary Best Selection is Matsuda Seiko's 23rd best album. The album was part of a commemorative release series for Matsuda's 20th anniversary since debut, including this best album, the single "20th Party", and the album Seiko Matsuda: 20th Party, all released through 2000. First press comes housed in a digipack. Most of the photographies for the album were made by famous nude photographer Shinoyama Kishin.

During the press conference held to announce Matsuda's divorce of Hatano Hiroyuki, her second husband, posters for the album promotion were displayed behind her. The album reached #22 on Oricon charts and charted for 4 weeks.