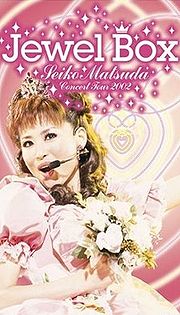 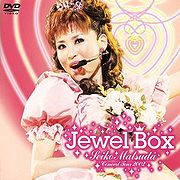 Seiko Matsuda Concert Tour 2002 Jewel Box is Matsuda Seiko's 19th live video release. It was filmed at Saitama Super Arena on June 21, 2002. The concert counts with Matsuda's daughter SAYAKA singing her debut single "ever since", SAYAKA is introduced by Matsuda singing the first verses of the song. Matsuda re-appears on stage to sing the last part of the song along with SAYAKA, although due the emotion she's not able to do it. The DVD reached #65 on Oricon charts and charted for 1 week.