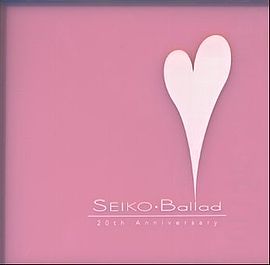 Ballad ~20th Anniversary is Matsuda Seiko's 22nd best album. It was the fifth best album released by Sony Music Japan after Matsuda moved to Universal Music Japan. Although it was released by Sony, Universal owned the rights of three songs of the album, "Anata ni Aitakute ~Missing You~", "Touch the LOVE" and "Anata no Sono Mune ni", as they were originally released during Matsuda's period under Universal. The album was released on the same date (April, 1) as her debut single "Hadashi no Kisetsu" as a 20th anniversary commemorative release, although it was released on her 19th year since debuting.

In addition of this release by Sony Music, Universal Music also released a commemorative series for Matsuda's 20th anniversary since debut, including the single "20th Party", the album Seiko Matsuda: 20th Party, and the best album 『LOVE』 Seiko Matsuda 20th Anniversary Best Selection, all released through 2000.

It was the first time for Matsuda not appearing in one of her covers.