Jikan no Kuni no Alice / Natsufuku no Eve 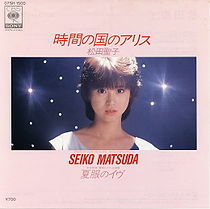 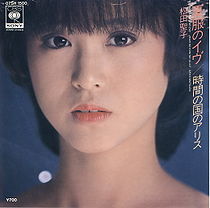 "Jikan no Kuni no Alice / Natsufuku no Eve" is Matsuda Seiko's 17th single and second A-side single. The second track was used for Matsuda's self-starred film of the same name, Natsufuku no Eve. Two different covers were released for this single; for the first version, despite being a double A-side single, the title of the second track "Natsufuku no Eve" was printed considerably smaller, hence a new version was released with equal sizes for both titles. The single was re-released in CD format in 2004 including the instrumental tracks with the original cover. It reached #1 on Oricon charts and sold 477,000 copies, becoming the #15 single of 1984. The re-edition CD reached #106 and charted for one week.