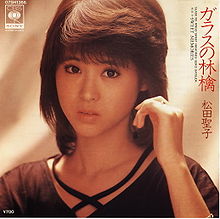 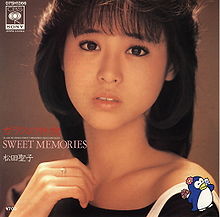 "Glass no Ringo / SWEET MEMORIES" is Matsuda Seiko's 14th single. Originally the single was released as a regular A-side+B-side single but "SWEET MEMORIES" gained much popularity after being used as CM song for Suntory CAN Beer. Due this popularity the single was re-released two months later as a double A-side with the same catalog number but different cover. It was re-released in CD format in 2004 including the instrumental tracks with the original cover. The single reached #1 on Oricon charts and sold 701,000 copies, becoming the #7 single of 1983. The re-edition CD reached #98 and charted for one week.