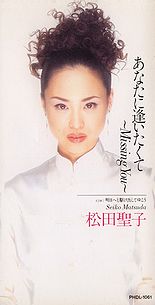 "Anata ni Aitakute ~Missing You~" is Matsuda Seiko's 38th single and first one released under Universal Music Japan. It was Matsuda's first single to be released with both the title track and coupling song instrumentals. The title track was used as ending theme for the TV-show Beat Takeshi no TV Tackle from May to June 1996, and as CM song for CANON Pixel. An English version of the title track was later released on her 30th album Sweetest Time. The single reached #1 on Oricon charts, charted for 22 weeks and sold 1,089,220 copies, becoming the #14 single of 1996. "Anata ni Aitakute ~Missing You~" is the only million seller single by Matsuda, and it was her first #1 after 8 years since the release of "Tabidachi wa Freesia".

Inagaki Junichi covered this song, along with Matsuura Aya, for his duet album Otoko to Onna -TWO HEARTS TWO VOICES-.