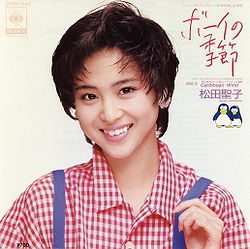 "Boy no Kisetsu" is Matsuda Seiko's 21st single. It was re-released in CD format in 2004 including the instrumental tracks. Both songs were used as movie theme songs, "Boy no Kisetsu" was used as theme song for the animated film Penguins Memory Shiawase Monogatari, and "Caribbean Wind" was used as theme song for Matsuda's self-starred film Caribe Ai no Symphony where she meet Kanda Masaki, her husband since 1985 to 1997. The single reached #1 on Oricon charts and sold 356,000 copies, becoming the #19 single of 1985. The re-edition CD reached #119 and charted for one week.