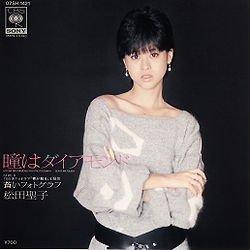 "Hitomi wa Diamond" is Matsuda Seiko's 15th single. The song "Aoi Photograph" was used as theme song for the dorama Ao ga Chiru. Both songs were re-titled to their English translations, "Diamond Eyes" and "Photograph of Yesterdays", on Matsuda's eighth album Canary to match the rest of the English tracklist. The single was re-released in CD format in 2004 including the instrumental tracks. The original release reached #1 on the Oricon charts, and the re-released CD reached #103 and charted for one week.