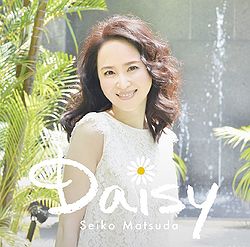 Daisy is the 51st studio album recorded by Matsuda Seiko, and her second record under EMI Records. It was released in three versions: a Type A limited edition which contains a DVD, a Limited Edition Type B that comes with a Photobook, and a regular CD edition. All lyrics and music were written by Matsuda except for "Bara no You ni Saite Sakura no You ni Chitte", which was written and produced by Japanese rock legend YOSHIKI. The song "Ima wo Aishitai" was used as the commercial song for the new brand HILLS AVENUE. The record was released shortly after Matsuda's jazz concept album SEIKO JAZZ, which hit stores two months prior.

The album ranked in at #5 on the Oricon's weekly physical album chart, and continued to rank for a total of six weeks. Daisy also reached #30 on the weekly Digital album chart.