Gone With the Rain 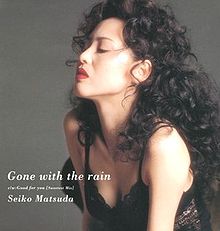 "Gone with the rain" is Matsuda Seiko's 42nd single and first one to be released in a 12cm CD format. The title track was used as ending theme song for the TV-show Wonderful. The single was released on the same date as Matsuda's special Christmas album release, Sweetest Time. The album included the title track, as well an English version of the song. The song "Good for you (Sweetest Mix) ", is a remix version of her fifth international single "Good For You". The single reached #28 on Oricon charts and charted for 8 weeks.