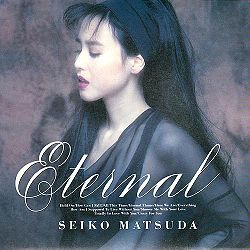 Eternal is Matsuda Seiko's 19th album and first cover album. Although is not an original album it's considered as a regular studio album. All the songs, except for the new song "Totally In Love With You", are covers of western artists selected by Matsuda Seiko. A second cover album, titled Eternal II, was released 15 years later as her 41st album. The album reached #3 on Oricon charts and charted for 7 weeks.