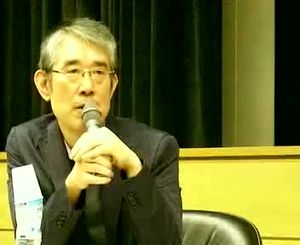 Matsumoto Takashi was born in the Minato Ward in Tokyo, Japan on July 16, 1949. Matsumoto started to cite lyrics and poetry when he was young when he offered words of encouragement to his parents after his younger sister died at childbirth. When he was a teenager, he often listened the The Beatles and was musically influenced by them. At the same time, he started the rock band Happy End as the drummer with Hosono Haruomi, Ohtaki Eiichi, and Suzuki Shigeru. Because Matsumoto was seen constantly carrying books, Hosono appointed him to write the song lyrics for the band. Since all the members took on a pseudonym, Matsumoto's was "Edo Mondan" (江戸門弾鉄).

Later on, he started to write to lyrics for other artists. His first assignment was writing lyrics for the song "Endan" for the folk group Itsu no Akai Fuusen in 1972. When Happy End broke up at the same time, Matsumoto also started to produce albums starting with Agata Morio's album Les Miserables in 1974. But, it wasn't until the release of the Agnes Chan song "Pocket Ippai no Himitsu" and the Ohta Hiromi song "Yuu no Handkerchief" that Matsumoto became a well-known lyricist.

In the 1980s, Matsumoto's popularity grew bigger as he wrote the lyrics to well-known songs like Imokin Trio's "High School Lullaby". He won his first award at the 23rd Nihon Record Taisho for writing the lyrics for the song "Ruby no Yubiwa" by Terao Akira in 1981. He also wrote lyrics for various idols, including Matsuda Seiko, C-C-B, Yakushimaru Hiroko, and others, that became instant hits and topped the Oricon charts. A decade later, he became well-known for writing various lyrics for the Johnny's group KinKi Kids, including the smash-hit single "Glass no Shounen" which sold over a million copies and is currently is the biggest selling single that contains Matsumoto's lyrics.