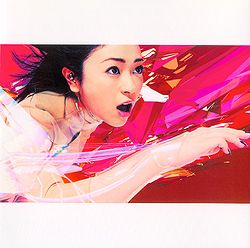 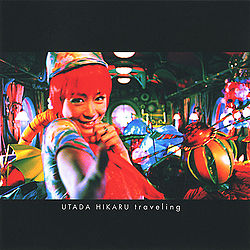 "traveling" is Utada Hikaru's ninth single. "traveling" was used as the "NTT DoCoMo FOMA" CM song. The PV was directed by Kiriya Kazuaki (who also shot the photography and helped with the art direction), and is the second of the famous "Kiriya Trilogy" of Utada promotional videos. This is also the second of Utada's singles to have a DVD Single. The single reached #1 on Oricon Singles charts and charted for 21 weeks. It also reached #51 on the world sales charts, despite not charting for airplay. This single sold over 856,000 units in Japan and became her fourth single to chart two weeks at #1 on the Oricon Singles charts. This single became the #2 single of 2002 in Japan. Unlike her other singles, Utada never performed "traveling" live on TV (except for in the SMAP x SMAP medley) for unknown reasons. Makihara Noriyuki covered "traveling" on his Listen To The Music 2 album.

"traveling" contains a few English lyrics not listed in the booklet. They are: "Come on yeah," "Whatcha doing tonight, let's go for a ride!" and "Can you take me up, you look quite good. Can you keep it up? I would like to."

There are six versions of "traveling" to be found in Utada's discography. These different versions include: