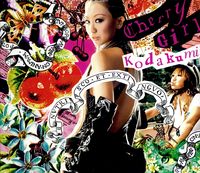 "Cherry Girl" is a pop song by Koda Kumi. The song first appeared as the first a-side to her dual, 34th single Cherry Girl / Unmei. The song was used as the theme for the dorama of the same name, which was included in the CD+2DVD version of Black Cherry. It was also used in the TV CM for the Toshiba SoftBank 811T.

The music video for "Cherry Girl" was directed by Takahata Hideta and produced by Shigematsu Keiichi.

There are six versions of "Cherry Girl" to be currently found in Koda Kumi's discography.