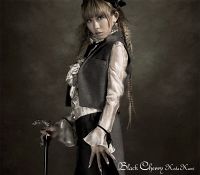 "Get Up & Move!!" is a hip-hop/pop song by Koda Kumi. The song is found on her fifth studio album Black Cherry as track #2. It was used in the TV CM for the Suzuki Chevrolet MW.

The music video for "Get Up & Move!!" was directed by Kawamura Kensuke of GOIS.

It is mostly a showcase of Kuu and her dancers' abilities in dancing, featuring them performing various choreographed moves against changing backgrounds and, for Kuu, changing outfits. A "how-to-dance" video was released alongside the PV on BEST ~BOUNCE & LOVERS~ demonstrating the moves at a slower pace, and for both the male dancers and female dancers.

There are three versions of "Get Up & Move!!" to be currently found in Koda Kumi's discography.