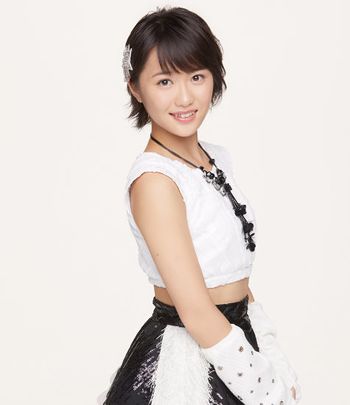 Kudo Haruka (工藤遥) is a Japanese actress and singer managed by J.P ROOM. She was formerly part of Hello! Project as a tenth generation member of Morning Musume.

Kudo Haruka joined Hello! Project as a member of Hello! Pro Egg in March 2010, with Nagasawa Wakana and Kizawa Runa.

Haruka was selected from Morning Musume's 10th Generation audition to join the group on September 29, 2011, along with Iikubo Haruna, Ishida Ayumi, and Sato Masaki.

The tenth generation made their official presentation on the same day they were announced as new members in the "Morning Musume Concert Tour Fall 2011 Ai Believe ~Takahashi Ai Graduation Memory Special~" concert, and they participated in a performance of the song "Tomo".

Haruka announced her graduation from Morning Musume and Hello! Project on April 29, 2017, to take place at the end of the 2017 Morning Musume fall concert tour. She cited her desire to become an actress and further stated that though she considered attempting to balance acting and being in the group, in the end she decided to graduate to avoid burdening her fellow members. She officially graduated on December 11, 2017 in the Morning Musume Tanjou 20 Shuunen Kinen Concert Tour 2017 Aki ~We are MORNING MUSUME~ Kudo Haruka Sotsugyou Special concert finale at the Nippon Budokan.