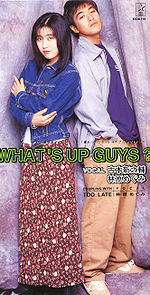 "WHAT'S UP GUYS?" is the 18th single (13th major label single) released by Hayashibara Megumi. The title track is a collaboration with Furumoto Shinnosuke (本新之輔), and it was used as the opening theme song to the Bakuretsu Hunter anime (Hayashibara previously sang the theme for the radio drama). Hayashibara does the voice of Tira Misu in the seires and Furumoto does the voice of Carrot Glass. The title track doesn't appear on any of Hayashibara's studio albums, but a new version of "TOO LATE" later appears on bertemu.

The single was released on the same day as string of Bakuretsu Hunter singles. Okui Masami released her "MASK" single, which was the ending theme song for the series. There was also a double a-side released contain both the opening and ending themes entitled, "WHAT'S UP GUYS / MASK".

The single reached #38 on the weekly Oricon chart, and stayed on the chart for a total of three weeks. In all the single sold a total of 24,750 copies.