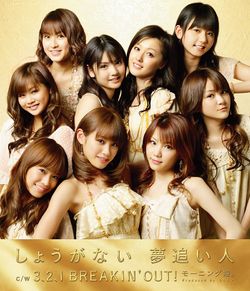 "3, 2, 1 BREAKIN' OUT!" is a song recorded by Morning Musume. It appears on the single "Shouganai Yume Oibito" as track #2 and the album Morning Musume Zen Single Coupling Collection as track #12 on the third disc.

"3, 2, 1 BREAKIN' OUT!" was used as the theme song for the Anime Expo 2009, where Morning Musume attended as Guests of Honor. To promote their visit (and the opening of their official MySpace page), a competition was held where fans could make an original promotion video (OPV) of the song, provided with special footage from Up-Front Works. The results were announced during Morning Musume's concert at the Expo. The winning video, made by zUNGRY&MYUNGRY from Japan, was featured on the Eizou The Morning Musume 5 ~Single M Clips~ DVD.