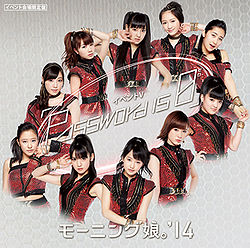 "Password is 0" is a song recorded by Morning Musume '14. It appears on the single "Toki wo Koe Sora wo Koe / Password is 0" as track #2. The song was used as the theme for a KDDI au commercial campaign. The Event V was sold only during launch events and therefore did not chart on the Oricon charts.

There are currently three recorded versions of "Password is 0" found in Morning Musume '14 and Hello! Project's discography. These versions are: