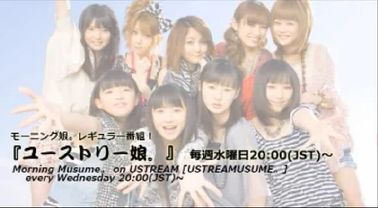 UstreaMusume (ユーストリー娘。) is an internet broadcast on the ustream website by Morning Musume members Niigaki Risa (host), Fukumura Mizuki, Ikuta Erina, Sayashi Riho, and Suzuki Kanon. The name also refers to the group of members who are present in the show.

The show is an hour long broadcast which began on April 13th 2011. It broadcasts every Wednesday at 20:00 JST. The show revolves around the host Niigaki conversing with the new members of the group as well as reading out comments and question posed by the live watching audience. Guest appearances are also made by members of S/mileage.

The show is also used as a promotional platform for both Morning Musume and S/mileage in regards to CD releases, concerts, and other activities.

Fans can post their live comments in the hopes that Niigaki reads them out, but they can also email the show on ustreamusume@gmail.com.