The Other Side Three ~Previously Unreleased Version~

From generasia
(Redirected from The Other Side Three: Thunderpuss, Soul Solution)
Jump to: navigation, search 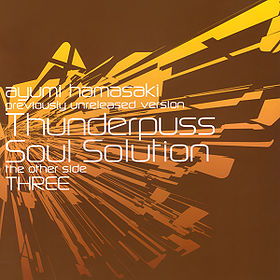 "the other side THREE ~previously unreleased version~" is a collaboration single released by Hamasaki Ayumi, Thunderpuss and Soul Solution. This is the third release in a four remix singles set, and it was only available under pre-order only.